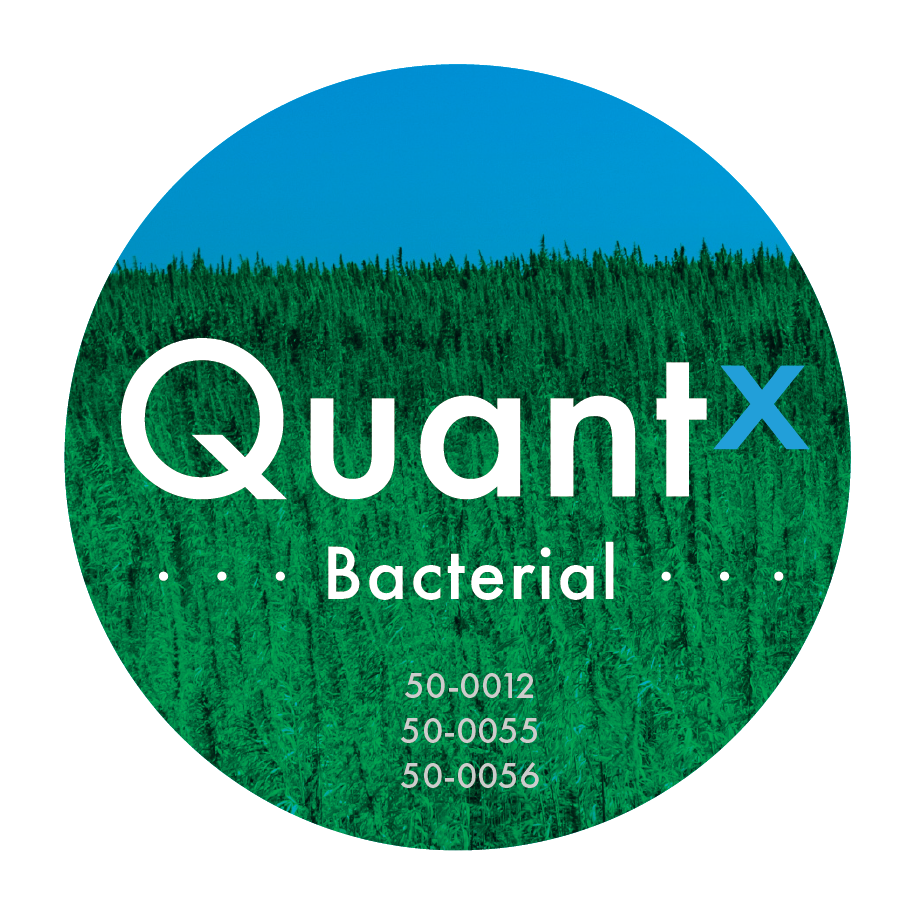 Cannabis spp. is host to many bacterial pathogens of immediate concern to public health and safety. These bacterial pathogens can be broken down into categories of specific interest such as Total Aerobic Bacteria, Bile Tolerant Gram-Negative Bacteria, Total Enterobacteriaceae, and Total Coliform Bacteria.

Along with these broad classes of bacteria, certain species are of great concern including Salmonella enterica, Escherichia coli, and Pseudomonas aeruginosa. While these broad class indicators and select species are generally accepted as the greatest areas of concern regarding bacterial pathogens on Cannabis, each state determines its own rules and regulations regarding microbial contamination on recreational and medicinal marijuana. State-to-state regulatory variation has created the need for tests that can adapt to each state’s specific needs, are able to rapidly quantify bacterial contamination, and are able to quantify multiple class indicators in a single test. QuantX Bacterial from PathogenDx delivers the flexibility that labs need to conform to each state’s specific rules and regulations, quantify four broad class indicators, and deliver species specific detection all within a single test.

States which require the assessment of bacterial contamination typically require the quantification of one or more of the broad class indicators listed above. With standard FDA BAM plating methods, the minimum amount of time needed to quantify one class of bacteria takes a minimum of 24 hours, with each additional broad class indicator greatly increasing the workload. To fully quantitate the complete panel of classes listed above would require up to five separate media preparations and up to 32 hours of incubation time. QuantX Bacterial has reduced the sample preparation to 1 single preparation and results in 8 hours of each listed broad class indicator as well as species specific detection, all within 1 sample.

In order to quickly and accurately determine the bacterial load of each class of bacteria, QuantX Bacterial utilizes a novel, hierarchical based, multiplex PCR. Within each PCR reaction, genetic markers specific to bacterial genes, species, families, and kingdoms are targeted to independently quantify each class of organism. Following the PCR reactions, Cy3 labeled targets are then hybridized to a microarray containing probes specific to each broad class indicator. The relative fluorescence of each probe can then be measured and compared against an internal positive control, accurately and independently quantifying each class of bacterial pathogen within a single sample.

The single QuantX Bacterial sample preparation has been standardized across many of PathogenDx’s products, meaning the same sample may also be used on the AOAC-approved QuantX Fungal and DetectX Combined platforms.