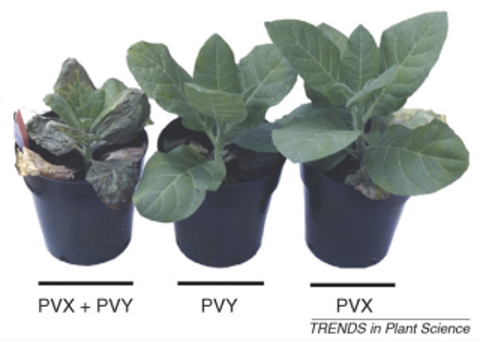 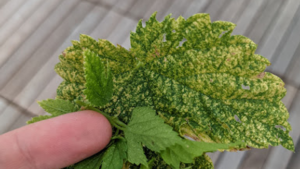 While most virus infections in plants may be of a single strain, it is possible for multiple viruses to infect the same plant. Plant virus co-infections can have severely negative outcomes for the infected plant depending on the viruses involved in the co-infection.

– Antagonism — the viruses compete, and one wins.

– Synergism — when two viruses infecting the host have a dramatic negative effect on the plant compared to single virus. 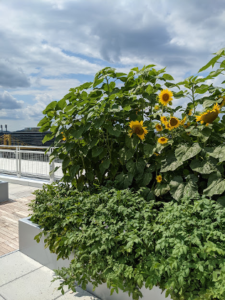 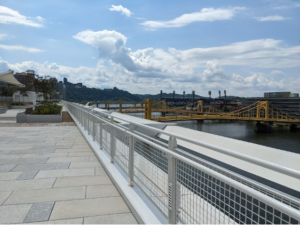 Encountering virus-viroid co-infection in the “field”

The convention center offered scenic views of the Allegheny River and a substantial rooftop vegetable garden!

While on a recent trip to Pittsburgh Pennsylvania for the annual International Association of Food Protection Conference (IAFP) I encountered some sick hop plants on the rooftop garden of the David L. Lawrence Convention Center. The hops presented symptoms of viral infection including severe stunting, leaf mottling, and flecking.

Symptomatic hop leaf from the convention centers rooftop garden. Notice the mottled appearance of the leaves in the first image.

Since starting at PathogenDx I have been working to develop a multiplexed plant virus detection assay specifically for Cannabis plants. Hops are in the Cannabaceae family so viruses and viroids that infect Cannabis can also be an issue for hops and vis-versa. I took the leaf samples with me back to our lab in Tucson and ran them on our PhytoXassay which can simultaneously test for nine viruses at once. The test results indicated that the hop plant was infected with Arabis mosaic virus (ArMV) and Hop Latent Viroid (HLVd). The HLVd results were not surprising, HLVd is known to be widespread in hops and generally does not have a negative impact on the plant. The ArMV infection was interesting and likely accounted for most of the symptoms including the stunting, leaf mottling, and flecking.

A classic example of a synergistic virus pair is Potato Virus Y (PVY) and Potato Virus X (PVX). PVY is in the Potyvirus genus and PVX is in the Potexvirus genus. In the figure above you can clearly see that when the tobacco plant is infected with PVY or PVX alone there are no dramatic symptoms, however when the plant is co-infected with both PVY and PVX there is severe necrosis and wilting of the plant. The mechanism by which synergism works can vary. In this example PVY encodes a viral silencing suppressor protein. This protein functions to dampen the plants natural viral defense system and allows for the PVX virus to accumulate ultimately killing the host plant.