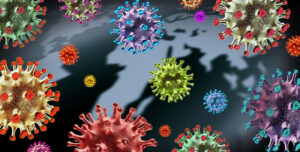 When SARS-CoV-2 first emerged in early 2020, there was a single version of the virus, now designated the “Index virus” by the World Health Organization. Within 6 months, a first variation (Variant) of the index virus emerged, which was distinguished by a single mutation (D614G) in the Spike protein, which it is thought, gave rise to a significant increase in its infectivity when it emerged in Europe and then soon thereafter in the US and internationally.

Through the remainder of 2020 and into 2021, the virus evolved, more-less stepwise, through a series of Clade Variant forms, Alpha, Beta, Eta, Gamma, and so on, each with a growing set of mutations in the Spike gene and elsewhere in the virus. In each case, the newer Variant type was seen to out-compete and thus replace its predecessor, most often based on an increase of viral infectivity.

As the number of Variants grew to become a relatively large set, it began to be seen that in many cases, the next Variant to come in the series possessed a panel of mutation in the Spike gene that was characterized, at least in part, by new combinations of “Old” mutations seen previously in the Variants which had preceded it.

The Rapid Emergence of the Omicron Variant and its Subvariants.

In late 2021, only 18 months after the detection of the first of the European SARS-CoV-2 Clade Variants, a new family of Variant was detected, given the name “Omicron.” The first Omicron (BA.1) was seen to possess 31 mutations in the Spike gene that were not present in the original SARS-CoV-2 index virus, but 11 of those 31 Spike mutations had been previously seen in one or more of the WHO’s variants of concern/interest that preceded BA.1 during the first 24 months of the pandemic. Thus, a new version of the Spike gene was built from a new combination of 11 well- known, “old” mutations.

Since January 2022, the rate of Omicron change has increased. In the first 6 months since its first detection, Omicron has evolved through a series of “subvariants”, BA.1à BA.2à BA.2.12.1à BA.4 & BA.5, where closely related BA.4 & BA.5 (sometimes called BA.4/BA.5) are identical within the Spike gene but possess mutations elsewhere in the virus. Visit the CDC website for the most up to date Omicron statistics.

Since May 2022, the BA.4/BA.5 sub-variant pair has almost completely replaced all other Omicrons in the US. Thus, it is predicted that by early 2023, BA.5 may alone outcompete the other omicrons to become the “2023” SARS-COV2.

The Medical Significance of Omicron, Especially the dominant BA.5 Subvariant.

In a recent New England Journal of Medicine publication, “Neutralization Escape by SARS-CoV-2 Omicron subvariants BA.2.12.1, BA.4, and BA.5”, July 06 2022, Hachmann et.al., it was shown that relative to the original SARS-CoV-2 Index virus, viral isolates of the Omicron BA.4/BA.5 subvariants displayed a 10-20 fold diminishment in serum antibody response in patients who had previously received the Pfizer (mRNA) vaccine or who had been “Naturally” vaccinated by SARS-CoV-2 infection. From those results, the authors concluded that, “These findings provide im­munologic context for the current surges caused by the BA.2.12.1, BA.4, and BA.5 subvariants in populations with high frequencies of vaccination and BA.1 or BA.2 infection.” More succinctly, the data suggest that the serum antibodies induced by the current mRNA vaccine and also the serum antibodies generated by ordinary SARS-CoV-2 infection bind poorly to both the BA.4 and BA.5 subvariant, presumably as a result of the specific pattern of mutational change in the Spike surface protein seen in BA.4/BA.5.

How PathogenDx Testing Can Help Keep up with SARS-CoV-2 Variants.

PathogenDx has developed a simple array based test, “DetectX-Cv+,” to detect COVID-19 Variants, based on detection of the new combination of “Old” Spike Gene mutations presented by each variant, each such combination serving as a type of “molecular barcode.” Since it now seems that the Omicron subvariants display exactly that sort of a “molecular barcode” in the Spike gene, it is likely that, going forward, the PathogenDx Variant test, “DetectX-Cv+”, can be deployed at very large scale as a fast, inexpensive alternative to regional Next Generation Sequencing, to track and predict the emergence of seasonal changes in SARS-CoV-2 viral genome in 2023 and the years to come thereafter. The differentiator with this type of technology is its capability to keep up with the number of mutations at the speed at which this virus is changing with a rapid turn-around of results in less than 6 hours, PLUS delivering Single-Nucleotide accuracy versus the current approach of Next Generation Sequencing (NGS) which is taking a minimum of 4 days and up to 15-20 days. Having faster, more affordable and accurate technology is the only solution to keep up with the mutational engine of this virus.